The many hours of smoking grain back in March paid off in a big way when I decided to brew this Grätzer in late April. Grätzer is a smoked beer from eastern Germany that received its smoked character from the wood that was burned to create heat to dry the malt. Traditionally it was a wheat beer, but I decided to smoke 4 pounds of raw spelt and use two pounds of Weyermann Light Wheat to provide the enzymes for starch conversion. I had calculated that that should provide just enough diastatic power for conversion, but that didn't work out. I ended up having to go up to 4.5 pounds of Weyermann Light Wheat and even that wasn't enough. The mashing process took several hours as I periodically tested wort samples with iodine to see if the starches had fully converted. The mash ended up taking 4.5 hours, and even then it wasn't fully converted. The mash was a decoction mash, which probably wasn't a great idea when starting off with only two pounds of malt. 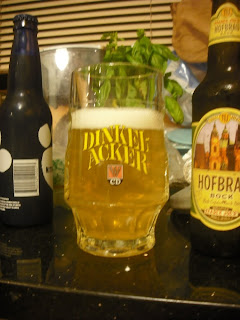 According to my brewing notes, the sparge was very slow and stuck toward the end, and I had so little wort that I had to shorten the boil from 90 minutes to 60. Even with that I still ended up with only 4 gallons of finished beer, but what a beer it was. The photo doesn't do it justice, the color is light as straw, lighter than any commercial light lager. This was also the first beer I ever fermented with a hefeweizen yeast, in this case Danstar Munich. I wasn't a huge fan of it at first, but it's beginning to grow on me. We'll see how it stands up once I brew with WB-06.

The only smoked beer that most people are familiar with is Schlenkerla, which is a lot darker. Even Brauerei Spezial Rauchbier is much darker than this one. So when you first see the color you're not expecting the smoke, and it does hit you. Not as ham-tasting as Schlenkerla, definitely milder like Spezial, but quite noticeable. And the wheat beer yeast has kind of a bubble gum type flavor to it, which makes for an interesting combination. My parents weren't huge fans of it, but everyone else who tried it loved it.

I still have several bottles left of this, but the smokiness has gotten a little less pronounced over time. It's a great summer beer, only 4% ABV, hopped to 40 IBU with 2.5 ounces of Saphir, which is a very subtle noble hop which is terrible for lagers but wonderful for wheat and rye beers. If I ever were to do this beer again, I think I'd smoke malt as well as raw grains, and I'd definitely try to smoke much more than four pounds, so that I could do multiple batches of smoked beers.