Once your grains are crushed, it's time to mash them by adding water. There are a whole bunch of different things to think about when mashing grains. In no particular order, they are: 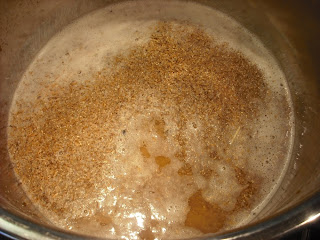 Before I start explaining these topics, let me just say that this is just a layman's description of the mashing process. If you want more detail, I would recommend reading John Palmer's section on mashing in How To Brew, or Braukaiser's "Theory of Mashing," both of which will give far more information than I can convey in a single blog post. And if you're really interested, you can start googling and find excerpts from brewing textbooks and brewing journals, which I find absolutely fascinating.

But back to mashing. Water temperature is the most important thing most homebrewers will have to deal with. Remember that malted grains have already begun the process of starch modification, that is, the conversion of starch into sugar. Roughly 20% of the starches in malted grains have already been converted. The malting process also activates enzymes present in the grains, which are necessary to continue the process of starch conversion.

The most important temperature range for the mash is the sugar rest, or sacchirification rest, where amylase enzymes are activated to convert starches into sugars. The most common temperatures range from about 150F to 158F, depending on the type of beer brewed or the maltiness desired. Generally the lower a sacchirification temperature used, the drier a beer will be due to more simple sugars being produced, while the higher the temperature the maltier the beer will be due to longer chain sugars being produced. Beer yeasts prefer single chain sugars (glucose) but can also digest maltose (two joined glucose molecules) and lager yeasts can digest maltotriose (three joined glucose molecules.) Once you start getting into maltotetraose and higher, beer yeasts no longer have the ability to digest quite as many of those sugars, if any at all. You can make quite a good beer using just a single temperature rest between 150F and 158F, and in fact I've done so, but I've moved to various different mashing procedures.

What I do now is dough in (add water to my crushed grains, or vice versa) to reach a mash temperature of 100-104F. I calculate my mash infusions by using the mash infusion calculators at TastyBrew. Doughing in allows the grain to take up water without forming dough balls. If I were to do a single rest at 155F, I would have to heat water to around 170F, and the resulting mash at 155F would be above the gelatinization temperature of the barley starch, resulting in dough balls throughout the mash. Unless those dough balls are broken up, none of the grain inside the ball will be accessible to water, and thus those starches will not convert to sugar, leading to lower mash efficiency. So I like to start by doughing in. This temperature also happens to be within the temperature range of the acid rest, which activates the enzyme phytase to lower the pH of the mash, which I'll explain later.

The next step would be a protein rest, generally only used when using poorly modified malt or high amounts of high-protein malts or raw adjuncts such as wheat, corn, rye, etc. Protein is what forms the beer's head, so too much of a protein rest breaks down the proteins and leads to poor head retention. Too much protein can lead to chill haze, haziness in the beer when cold, but I drink my beer unfiltered so I don't really care about haziness or cloudiness. Even when I brew with wheat, spelt, and rye I generally don't worry about including a protein rest unless I'm doing a decoction mash (which I'll also explain later.) The protein rest temperatures are around 120F to 135F.

Once you get above 140F you start to activate the amylase enzymes. Beta amylase is most active between 140F and 150F, and alpha amylase above 150F. As the temperature increases, enzymes active at lower temperature are denatured and cease to be active, so by the time you get up into the 150s amylase enzymes are just about the only ones still active. To determine whether or not your mash has fully converted, it might be helpful to do an iodine test. What I do is take a small spoonful of wort from the top of the mash and put it into a glass. I put one drop of iodine in the glass: if the mash is fully converted, the iodine will remain yellowish; if not, it will turn blue. If it remains blue, you need to mash for a little longer. Generally a mash time of around one hour is sufficient to convert all the starches to sugar. But that is partially dependent too on...

It makes sense if you think about it because each unit of grain can produce only a certain finite amount of enzymes. The more water you have, the more spread out the enzymes are, and thus the longer it takes them to travel around and convert all the starches. I generally start off with a thickness of 0.75 to 0.8 for my doughing in, and add boiling water to try to reach 1.5 to 1.8 for my sacchirification rest(s).

Mineral content is something I never really though about when I started brewing. It was only after I started trying to brew light-colored beers and wondered why they always were kind of pink-hued that I began to look into my water quality. The types of minerals present in brewing water will have an effect on the color and taste of beer. Some of the important minerals and ions include magnesium, sodium, calcium, carbonates, chlorides, and sulfates. It helps to find out the various mineral levels your municipal water has. If you're on well water you'll probably have to get your water tested by a lab.

Once you know the levels of the various compounds, there are spreadsheets and calculators available online into which you can input those numbers. I think the spreadsheet I use was created by John Palmer, and inputting my numbers I found that my beers were going to emphasis hoppiness over maltiness, and that my water was most ideal for amber to brown-colored beers. However, if I wanted to brew Pilsner or Kölsch, one gram of calcium chloride added to the mash would make sure that I could get that nice straw color without any pink or other off hues.

For the quickest starch conversion, the pH of the mash needs to be in a range between 5.2 to 5.5. Obviously water starts at a pH of 7.0 or higher, but adding malt to water reduces the pH. The lighter the malt, the higher the pH of the mash will be, while the darker the malt, the lower the mash pH will be. In distilled water, wheat will result in a pH of around 6.0, Pilsner and 2-row around 5.7, Vienna around 5.5, Munich around 5.4, and roasted malts around 4.7. Thre is an EZ water calculator spreadsheet circulating on the internet that aids in calculating mash pH, or you could just buy a pH tester. I've never felt the need to do so, and I doubt that either I or anyone who's tasted my beers would probably taste the difference if I decided to start fooling around with mash pH.

Since mineral content of water has an effect on mash pH, different regions or cities specialized in different types of beers, depending on the type of water they had. Cities with hard water would brew darker beers, since the pH-lowering effects of dark and roasted malts would counteract the alkalinity of the water. Cities with soft water such as Pilsen could brew lighter beers, although with the higher pH of the lighter malts they would have to begin their brews with acid rests in order to achieve their optimal mash pH. My brewing water isn't particularly hard, but I do use a short acid rest just to make sure that I'm (hopefully) working within an optimal pH range.

If I had to take a guess at the type of mash most frequently used by homebrewers, I would have to imagine it would be a single infusion mash. Hot water is added to crushed malt to reach a single target temperature within the sacchirification temperature range. It's relatively easy to do.

I normally use a multi-step infusion mash, doughing in to 100-104F and then adding infusions of boiling water to reach various predetermined temperature steps such as 145F, 153F, 158F, etc., depending on the beer I'm brewing.

There is also direct heating, in which heat is added directly to the mash tun in order to reach the various steps. This is often only feasible with thin mashes, otherwise the direct heat could scorch the grains.

Finally there is decoction mashing, in which large portions of the grain are removed from the mash, brought to a boil, and then returned to the mash to reach the various temperature steps.

There is probably much more to talk about in terms of mashing procedure, but this hopefully should provide the basic outlines, with some of the links up above providing much more detailed information.