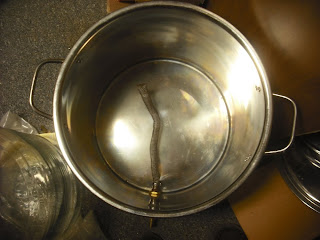 I'm not sure why I decided to break lautering and sparging into two separate articles, but what is done is done. Lautering comes from the German verb läutern, meaning to clarify or purify. It is the process by which the wort (which is what the water is called once it is full of maltose and other sugar compounds) is clarified. While it is still in the mash tun, there are large amounts of flour, barley hulls, and pieces of grain. Naturally you don't want these in the boil, you just want to boil the liquid, and ideally you want it to be as clear as possible.

The barley hulls will help to act as a natural filter, keeping out larger particles, but it takes a while for the grains and hulls to compact enough to become an effective filter bed. Liquid can come through but most solids are trapped. Until then, the wort should be recirculated back through the mash until the wort runnings come out clear. Hulls are also only your secondary filter, you still need a primary filter. I use a bazooka screen, which is a little mesh tube that threads onto the inside of my spigot fixture. The photo shows what the screen looks like inside my tun. When I open up the spigot on my mash tun I reserve the first half gallon or so of wort in a separate pot, after which time the wort is free of debris and relatively clear. After a few minutes the mash tun has emptied and I can begin to sparge.