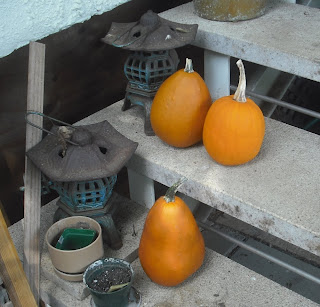 When life gives you pumpkins, make pumpkin beer. We've had volunteer pumpkins popping up in our garden for the past couple years, kind of infuriating since we had hoped they were zucchini, but hey, sometimes you just gotta run what you brung. I hadn't planned on making pumpkin beer until someone put the idea in my head last week. So I figured, why not try a pumpkin beer? The reason I had initially rejected the idea was that I had visions of pumpkin flesh clogging up my siphons when transferring. But then I realized that pumpkin beer would actually be better off with pumpkin in the mash rather than post-boil.

And the pumpkins are just the right size for a small batch of beer, so I decided to go ahead and try a one-gallon test batch. I cut a small, elongated pumpkin in half and roasted it for 45 minutes at 350F. The next day I cut the flesh out and popped it into the mash tun. I ended up getting 24 ounces of innards and mashed that with 2 pounds of Weyermann Vienna. The problem with these small batches is that water calculation ends up being way off. I got almost 3 gallons of wort into the boil kettle, and still had at least 2 quarts of wort stuck in the mash. Oh well, just meant I'd have to boil longer. 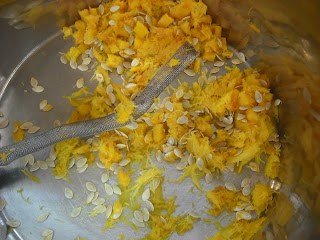 I first wort hopped with 0.5 ounces of Spalt and ended up boiling for 2.5 hours before I finally got down to around a gallon of wort. The wort ended up super dark and caramelized, so I'm very interested to see how it tastes. Yeast will be an S-04 yeast cake from my previous 1-gallon experimental batch, and this'll be the 5th generation for this particular batch of yeast. My plan is to get to 9 generations before I dump it. More to come in a few weeks once I get this bottled and carbonated.

Oh, and no spices in this one; I want pumpkin beer, not pumpkin pie beer.