I brewed this Emmerbier back in late February and still have a few bottles left. It's the first and only beer I've brewed with emmer, also known as farro. Emmer is an ancient wheat, one of the first wheat species to be domesticated, and probably formed the basic grist composition of the first brewed beers. It's a very interesting grain, very dark in color, although the beer didn't turn out too dark. 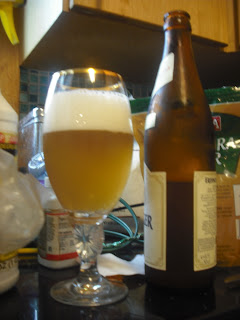 I used 4 pounds of Weyermann Vienna and 4 pounds of raw emmer, did a 3-hour long acid rest and did decoctions to rest at 133, 145, 155, and mash out. It was a very long brew day but the beer turned out to be quite good. Everyone who tasted it thought it was excellent, which I found somewhat surprising since it's not a particularly strong beer.

I anticipated a starting gravity of 1.041 but ended up with 1.047, and finished at 1.012. This was the first beer I started doing first wort hopping, which I've since stuck with. For this beer I used one ounce of Hallertau for the first wort hopping and an additional ounce 15 minutes before the end of the boil, which combined for an estimated 20 IBU.

As much as I would love to continue brewing with emmer, this particular batch cost me $3 per pound, so the grain costs end up being double what a comparable barley beer would be. Maybe I'll find a cheaper source at some point, but until then I'm guarding my remaining bottles very well.