The Mother of all Sparges 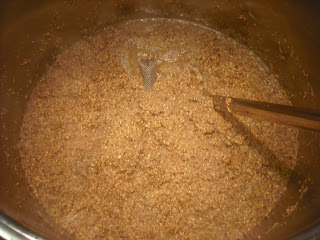 Well, for whatever reason, my bad luck with rye brewing continues. At first I threw in 10 huge handfuls of rice hulls (later added 3 more handfuls) but that wasn't enough to keep the sparge from sticking. I'm kind of at a loss as to why this is happening. It seems as though the grain bed is particularly dense, although as the picture shows, the bazooka tube is not plugging. I'm wondering if next time I shouldn't just keep my rollers at 12 o'clock to minimize the amount of flour/dust that might cause a more compact grain bed.

The initial runoff from the sparges came pretty quickly, but the flow rate slowed down substantially, and eventually stopped completely. No idea how much sugar I left in the mash tun, but according to my calculations I lost at least .222 gallons per pound of grain, as opposed to .181 for my last rye beer. Preboil Brix was 10.6, postboil was 13.6, which left me at 1.055 SG as opposed to the 1.058 I was shooting for. Lower volume and lower sugar, not good. I'm going to have to dial it in better for the next batch, maybe do a Roggenbock so that the rye is a smaller percentage of the grist.

This beer was hopped with one ounce of 3.5% Hersbrucker for 90 minutes and 1/4 oz. for 15 minutes. Chilling went off without a hitch but transferring to the carboy was a little slow due to the thickness of the wort slowing down the flow rate through the hop residue and the funnel filter. But it's in the carboy now and has a nice little kräusen going after only two hours. Good think I went down and checked just now, because I had forgotten to put vodka in the airlock. Whoops!

Now it's just a matter of weeks to allow it to ferment, condition, and then bottle and drink it. I'm hoping this one will be ready by Christmas.
Posted by pomofo at 7:01 PM