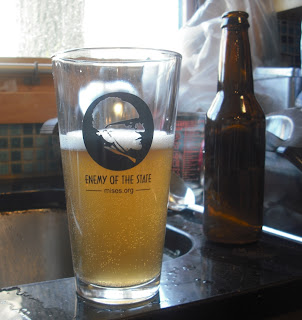 Despite only being in the bottle for 6 days, I just had to try the Citra Pils that I brewed at the beginning of October. It's a relatively light beer, ended up at 5.2% ABV with 9# of Weyermann Pilsner, hopped with 0.5 oz. of Citra for 90 minutes, and another 0.5 oz. at flameout. It has a really nice, smooth bitterness, and just a hint of citrus aroma and taste but not too overpowering. Qbrew estimated the IBUs at 30, compared to the 33 of the APA I brewed back in August. I openend a rump bottle that only had about 11 oz. in it, and while the carbonation was a little flat, it was still pretty good for 6 days. Another week or so and it will be just perfect. It's still a little hazy since the yeast are probably still working, a definite change from how clear it was in the carboy.

The APA used Cascade as a bittering hops with Citra as the aroma hops, and there's definitely a more pronounced bitterness with the APA. It's a good thing Citra has such high alpha acids, it could be a very good dual-purpose hop. Too bad it's a proprietary hop and so hard to find, it looks like the 2011 crop is almost completely sold out already. That said, I still think I prefer Ahtanum. The nice orange/tangerine taste of Ahtanum is preferable in my opinion to the grapefruit/citrus of Citra.
Posted by pomofo at 2:00 PM