I am fortunate in that I have decent tap water with which to brew. Before you start brewing all-grain, you might want to see if your city or county has a water report available in order for you to ascertain what types of beers you might be able to brew. I'll cover this in more detail in part 3 under mashing, but water does play an important role. Water that is too hard or too soft will likely not be able to be used for brewing without special mash procedures or additions of various salts and minerals, or perhaps dilution with distilled water. Some homebrewers even start off with distilled water and build a particular water profile by adding salts and minerals to mimic the water found in London, Munich, etc. I never paid too much attention to my water until I noticed that my light beers weren't as light as I had hoped, and sometimes looked like they had a funny pink hue to them. Then I got the water report and inputted the data from the water report into Palmer's water chart (an Excel sheet which can be found with a short Google search.) My local water is ideal for brewing darker beers, between amber and brown, and the hops bitterness will be accentuated because of the ratio of sulfates to chlorides. I could change this through judicious additions of certain salts, but I prefer to stick to the Bavarian Reinheitsgebot as much as possible, so I normally eschew the use of salts. My lighter-colored beers still taste good, but they turn out a little darker than they would if I were using water with more chloride and/or less sulfate.

In all-grain brewing, the malt used is primarily in the form of malted grains, which are mashed to create the sugary liquid known as wort. Malted grains are grains which have been soaked in water to begin the process of germination. The germination process begins to break down the starches in the grains into simple sugars. Once the rootlet of the germinating seed is roughly the same length as the seed, the process of germination is stopped. The seeds are exposed to hot air and dried, and the rootlets are shaken off to be used as cow feed. The resulting malted grains (malt) has had roughly 20% of its starches converted to sugars. The remaining sugars will be converted during the mash due to the activity of enzymes remaining in the malt. Thankfully none of us have to perform the malting process ourselves, we can buy ready-malted grain at any homebrew store or over the Internet.

Depending on the malting procedure and the temperature at which the grains are dried, various types of malts can be created, each with a different taste and color characteristic. The primary malts used are the base malts, which are malted from barley. There is 2-row malt, 6-row malt, Pilsner malt, pale malt, Vienna malt, and Munich malt, arranged in order roughly from the lightest to the darkest malts. A beer brewed with 100% 2-row malt should be straw-colored, while a beer brewed with Munich malt should be a dark amber to reddish-brown.

Aside from malted barley, malted wheat, malted rye, and malted oats are also available. Wheat malt is used in wheat beers, German Hefeweizen, Belgian witbiers, etc. Rye malt is used in rye beers, and malted oats are difficult to find but would most likely be used in a stout. Raw grains such as barley, wheat, spelt, emmer, etc. can also be used, but they need to be mashed with a base malt because the enzymes in malt are needed in order to convert the starches in the raw grains to sugars.

Caramel and crystal malts are malts which have been heated to higher temperatures, resulting in caramelization of the sugars in the malt. There are various grades of caramel malts depending on the temperature at which they have been kilned and how long they have been heated, and they're graded by color. You'll generally see them rated from 10 (lightest) to 160 (darkest). Caramel malts impart a darker color and a sweeter caramel flavor to beer, the darker malts imparting more of a caramel flavor than the lighter caramel malts.

To go darker than caramel malt you get into the realm of chocolate malt, black malt, roasted barley, etc. Each one of these has its own characteristics. Black malt can used to give color to porters and stouts, chocolate malt gives some chocolate, coffee, and dark berry notes, and roasted barley gives a strong roasted flavor with coffee notes.

There are many other fermentables out there, but this covers 99% of what most homebrewers will ever use. A great summation of the different types of malt, their colors and characteristics can be found in this malt chart.

I would break most hops down into three major categories: English, German, and American. English hops are those which would be most used in English-style pale ales, bitters, porters, stouts, Irish red ales, Scotch ales, etc. For the most part this will mean using Admiral, Fuggle, East Kent Goldings, and the various varieties of Golding hops.

Under German hops I would include any of the noble hops grown in Central or Eastern Europe that are used in continental lagers or Belgian beers. This would include Hallertau, Magnum, Hersbrucker, Perle, Tettnanger, Saaz, etc.

American hops I would classify as anything used in American-style IPAs, American pale ales, etc. Generally they're fruitier than the noble hops, often with a citrus flavor or aroma. Here I'd list Cascade, Centennial, Columbus, Citra, Amarillo, etc.

In developing your recipes, you need to take into account the percentage of alpha acids present in each hop variety (which data should be provided to you by the merchant) and the amount of time the hops will remain in the boil. 60-90 minutes of boiling will provide the maximum bitterness from hops, 15-30 minutes will provide less bittering and more flavor, and 15 minutes or less will provide more aroma and flavoring with minimal bitterness.

Here the major choice is between liquid yeast and dry yeast. There are many more varieties of liquid yeast than dry yeast, with a different liquid yeast being available for just about every style of beer that it is possible to brew. Liquid yeasts generally cost $6-8 per pack, while dry yeasts generally cost $2-4. Some liquid strains can be added straight to a 5-gallon brew, but others require first creating a wort starter from dry malt extract and water, pitching the yeast into the starter and harvesting the resulting yeast slurry to pitch into the 5-gallon brew. Because of the extra time and expense of creating a starter, I have never used liquid yeast and have relied strictly on dry yeast.

Yeasts are classified as either top-fermenting or bottom-fermenting. Top-fermenting yeasts are known as ale yeasts, and they ferment at the top of the wort and prefer temperatures between 60 and 75F. Bottom-fermenting yeasts are known as lager yeasts, and they ferment toward the middle or bottom of the wort and prefer temperatures between 45 and 58 degrees. Most homebrewers will use primarily ale yeasts, as the temperature range of ale yeasts is more conducive to indoor fermentation. I am fortunate that I have a basement with rooms that get down to 54F during the wintertime, so I have a 3-4 month window in which I can brew lagers without resorting to using a refrigerator.

Among dry yeasts there is still a decent variety of yeast, with different yeasts being better suited for different types of beers. There are only 3 types of commercially available lager yeasts that I know of, S-23, S-189, and W-34/70. I've had good results with S-23, am just starting my first few beers with W-34/70, and S-189 is so difficult to find that I probably won't ever experiment with it.

Among ale yeasts I've used S-33, which can do well for some Belgian-style ales, although some claim that the strain originally came from England. I've also used S-04, which is a little more neutral and did well in IPAs, and I just completed a run of beers with US-05, which is supposed to be a more neutral American-style yeast. A neutral yeast is one which allows more of the character of the hops and malt to come through. Many yeasts cannot be described as neutral because they impart their own unique flavor compounds to the beer. If you split 5 gallons of wort into two different batches and fermented each batch with a different strain of yeast, you would (or should) end up with two different-tasting beers.

There are various other strains such as T-58, Nottingham, WB-06, etc., each of which is best suited to different types of beers. You shouldn't think, though, that each yeast can only be used for certain types of beers. Part of the fun of brewing is experimenting with different types of ingredients, including yeast. The first run of beers I brewed, I used S-33 to make a Kölsch, an Irish Red, a rye beer, a Weizenbock, and a mint chocolate oatmeal milk stout. Each style of beer completely different from the others, but all fermented with the same yeast.

Hopefully you've gotten into homebrewing because you like beer and want to try to recreate some of the styles that you most enjoy. A good listing of the styles and substyles of beer can be found at the Beer Judge Certification Program's list of style guidelines. Once you have an idea of the type of beer you're interested in brewing, you can start looking at recipes that others have used to brew that style of beer. Some good resources are sites such as Beerrecipes.org, Beertools.com, TastyBrew, the Beer Recipator, Hopville, or forums such as Homebrewtalk. Once you've looked at a few recipes for the style you want to brew, maybe also doing a little googling to find the characteristics of the style, you'll be able to start formulating your own recipes. 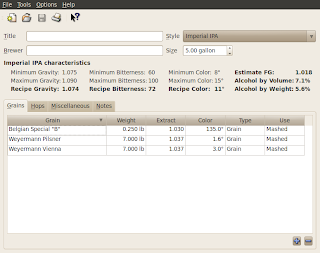 In order to formulate your recipe, it helps to have a brewing software program that will calculate what your starting gravity should be based on the grains you use, what your estimated bittering will be from the hops, etc. I use Qbrew, which is a freeware program available for Windows, Mac, and Linux. It's available in Ubuntu through the package manager, and for Windows and Mac users via a quick Google search. It has default values available for the potential sugar content of grain, which I've found to be pretty accurate. The default values for the alpha acid content of various hops can be changed very easily in each recipe depending on what the actual AA content of your hops is. 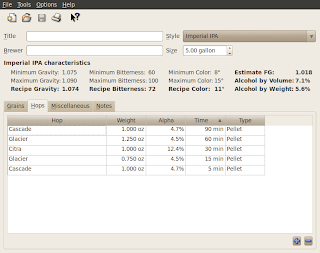 Your first few brews may differ from what the recipe program indicates, until you've determined what your actual efficiency is, but from there on out everything should work much more smoothly.
Posted by pomofo at 7:05 PM