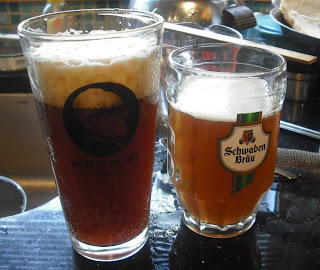 I can't believe it's the middle of January and I'm still waiting for ales to carbonate. With a basement in the mid-60s at its warmest (near the furnace) it takes several weeks to carbonate my bottles of ale. The wait is over for two of my more recent bottlings, an Altbier and my rye beer, which I've termed Roggenmunich since it was brewed with rye malt and Light Munich malt.

I've only ever had one Altbier in Germany, and not in Düsseldorf, which is where the style originated. Altbier is the darker, stronger cousin of Kölsch, but probably far less well known. Along with Kölsch, Hefeweizen, Berliner Weiße, and Gose, Altbier is one of the very few styles of top-fermenting beers still in production in Germany.

This Altbier was brewed with 9.5# of Weyermann Light Munich malt, 1# of Weyermann Caramunich I, and 2 ounces of Weyermann Dehusked Carafa I. I hopped it with 2.5 ounces of Hersbrucker for 90 minutes as the only hop addition. ABV is around 5.7% and the IBUs are around 40.

It turned out to be a really nice beer, smooth and malty without being cloying. I did my normal 2-step infusion mash, aiming for 152F for the saccharification rest, which is a little lower than I normally mash at. I figured that the maltiness of the Munich and sweetness of the Caramunich would come to the fore so I could drop the mash temperature to dry the beer out a bit. This is definitely a beer I'll want to keep in future rotations.

The rye beer turned out well too, although not quite as flavorful as previous versions that I've brewed with Vienna malt. My guess is that it's due to the yeast. US-05 is more neutral in flavor than S-33, which had been my main ale yeast. I just love how syrupy the rye beer looks when you pour it, and the way the bubbles take longer to rise to the top because of the beer's viscosity. If only it weren't such a pain to brew because of the beta glucans in the rye. In the photo the Roggenmunich rye beer is on the right, the Altbier is on the left.
Posted by pomofo at 6:36 PM