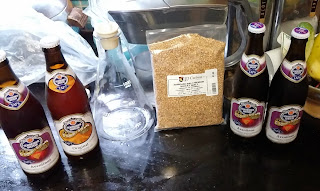 There comes a time in every brewer's life when you just want to do something different. You've experimented with different yeasts, malts, hops, and styles of beer. What comes next? Well, for me it was going a step further than just making my own beer, and experimenting with growing my own yeast. Sure, yeast is cheap to buy, but why not try to culture my own?

One of my pet peeves about American breweries is that there don't seem to be many who make a good, German-style Hefeweizen. Hefeweizen is a notoriously difficult style to brew, both for amateurs and professionals. I've only ever had two Hefeweizens in the US that tasted anything like German Hefeweizen. One was at Bootlegger's Brewery in Fullerton, the other was a Dunkelweizen at Bluejacket in DC.

For homebrewers like me who prefer to use dry yeast, there really aren't too many options for brewing Hefeweizen. I tried Danstar Munich and Safale WB-06, but neither one really provided the flavor I wanted. And I really don't want to experiment with liquid yeast, because the descriptions of their flavor profiles are all over the map. And of course, it doesn't help that brewing advice for Hefeweizen is all over the place too. Some say that if you want the nice, banana-y flavors that you have to keep it cool, while others say it needs to be warm. What to do?

My favorite Hefeweizen is Paulaner, and my favorite Weizen overall is Aventinus Weizenbock by Schneider. The good think about Hefeweizen is that it always has yeast in the bottle, hence the "Hefe" part of the name. In Germany, if you're pouring a bottle of Hefeweizen, you pour out all but a fingerful of beer into your glass, then roll the glass really fast between your hands to stir up the yeast on the bottom, then pour it into your beer. That yeast at the bottom, assuming it's the same strain used at fermentation and not added specifically for bottle conditioning, can be a source for valuable yeast cells that can be cultured to create your own yeast colony.

According to everything I read online, Schneider was one of those breweries who bottle their Weizenbier with the same strain used in fermentation. So buying a few bottles of Schneider should allow one to culture their Hefeweizen yeast. I went ahead and bought three bottles of Aventinus and one bottle of regular Schneider Weisse to try to culture the yeast.

I already had a one-liter Erlenmeyer flask that I had purchased with the intention of using it to culture yeast. In order to provide a good wort in which the yeast could grow, I purchased one pound of light wheat, with the intent to make four ever-stronger batches of wort. The hops I used for their antibacterial properties were Magnum hops off the vine in my backyard (the subject of a future post.)

The first batch of wort I made by crushing two ounces of the light wheat, adding to a quart of water, and heating to 150F. I covered it and checked the temperature every 15 minutes, heating back to 150F if the temperature had fallen. I periodically took small samples of the wort, put them in a glass, and added one drop of iodine to see whether or not the starches had converted. Iodine will turn blue in the presence of starch, but will not change color when no starches are present. Because this batch of wort was so thin, it took over an hour for conversion. Once the starches were converted, I strained the solids out of the liquid and boiled the wort with a few hops cones for 60 minutes. By that time the gravity of the wort was around 1.026, fairly weak, which is a good thing for yeast cells that might be strained from the combination of high alcohol levels in Aventinus and the unknown conditions of transportation and storage.

I poured the hot wort into the Erlenmeyer flask and then placed the flask into a tub of cold water, stirring the flask around to let as much heat escape as possible. Within 15-20 minutes, the wort was cooled to below 80 degrees, thus making it safe to add yeast. After finding a couple willing volunteers to help me consume the contents of the Aventinus and Schneider Weisse bottles, I quickly stirred up the yeast at the bottom of the bottles and poured the yeast slurries into the Erlenmeyer flask. I capped it with a universal bung (which was too small; you need to get a properly sized rubber stopper), added an airlock, and set it on the counter to watch it work.

By the next day, I still hadn't seen much activity. Then I remembered that I had forgotten to add yeast nutrient and yeast energizer into the wort. Doh! If you're trying to culture yeast from such small samples, every little bit of help is needed. So I quickly boiled a small amount of yeast nutrient and energizer and added it to the flask. Voila! Within a few hours I had a very vigorous fermentation.

For the three subsequent batches of wort, I used three ounces, five ounces, and six ounces of wheat respectively. Because of the increased absorption of water by larger amounts of malt, volumes were a little lower in the subsequent batches. The final batch I boiled for only about 45 minutes because I was facing a time crunch, and the starting gravity was around 1.046, roughly what the starting gravity of a standard Hefeweizen.

I cooled the wort in these subsequent batches by covering the pot 15 minutes before the end of the boil to sterilize the cover and then placing the pot in a tub of cold water in the sink. I changed the water once and just let the pot sit covered. After about an hour, I sanitized my temperature probe (also the subject of a future post) and measured a temperature of less than 80 degrees. I then poured off most (not all) of the existing wort and added the new wort to the flask. Make sure to taste some of the old wort. If you have an infection, or if wild yeasts have taken hold, you'll be able to taste it and toss the yeast and start over with a fresh batch. Better to lose some of your yeast culture than to find out after five or more gallons of beer that you have a yeast infection. 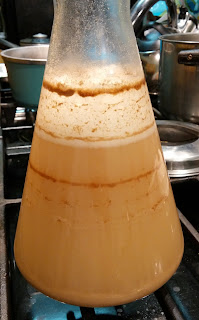 If you take a look at the second photograph, taken during fermentation of the final batch of wort, you can see the yeast and sediment at the bottom of the Erlenmeyer flask. I'm still probably a little on the light side in terms of the number of yeast cells I have in that flask, but I've never been one to be afraid of underpitching. A little yeast nutrient in the wort and I should be just fine. Not too much longer now before I get to test this yeast in a five gallon batch and see if it provides the German Hefeweizen flavor I've been looking for.