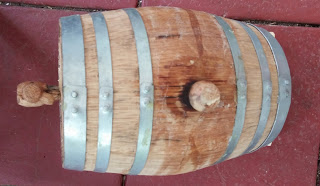 I'm going to take a brief detour from brewing discussion and talk about my experiment with small batch aging of spirits. For those of who live in areas where it's impossible to distill liquor ourselves, this means purchasing the cheapest, highest-proof alcohol possible from the liquor store, placing it in a small charred oak barrel and letting it age for a few months. The theory is that, because the amount of barrel interior surface area per amount of liquor increases as the barrel size decreases, a smaller barrel could produce in a few months a comparable spirit to what would take years in a standard-size (42 gallon/159 liter) barrel. So I decided to buy a 2 liter barrel and try my hand at improving rot-gut spirits. The 2L barrels are available online for anywhere from $40-60 shipped.

I started by filling my barrel with hot water and letting it sit for a day to ensure that the wood would absorb water and expand, thus ensuring a leak-free experience. Then I filled the barrel with as much 100-proof vodka as I could. It turns out that my little 2 liter bottle had a capacity of about 2.3 liters. And then it was just a matter of remaining patient while the spirits aged. Within a couple of weeks there was already a noticeable improvement in flavor of the vodka, as well as a definite change in color as the liquor darkened from contact with the charred interior of the barrel. The flavor was also very oaky, as you would expect from a new barrel. After about two months in the barrel, I decided to pull the vodka and age some rum, a mixture of both standard proof and 151-proof rum. The 2.3L of vodka had, through evaporation, been reduced to about 1.5L. The angels certainly took their share!

The rum was aged for close to three months and it also improved greatly in taste, but by this point the spigot on the barrel had started to leak pretty severely, so I purchased some replacement spigots. I then pulled the rum, with the idea of aging it again later, and decided to make some Madeira. From a little over two liters of rum I ended up with about 1.25L.

For the Madeira, I used one bottle of Charles Shaw Sauvignon Blanc, one bottle of Charles Shaw Chardonnay, and 600mL of the cheapest American brandy I could find. I placed the barrel out on our sun porch, as I had with the previous agings, and largely forgot about it until about two months into aging. When I checked on the barrel, mold was growing around the bung and all over the spigot, so I cleaned those areas off with vodka and monitored for a few days. With no more mold growth, I thought I was out of the woods. That is, until I checked back a few weeks later and found fruit flies swarming all around the barrel. I had previously tried to seal the spigot leak with beeswax, unsuccessfully. However, that beeswax gave the fruit flies a place to lay their eggs, so I found dozens of larvae all over the wax. Not only that, but because the spigot is wood and therefore porous, the wine had penetrated all throughout the spigot. And because wine, unlike liquor, still contains residual sugars, it is even more attractive to fruit flies than liquor. Judging by the vinegary smell coming from the spigot, the fruit flies had been having a good time drinking the wine that had made it to the surface of the spigot.

Because I couldn't risk acetobacter contamination of the Madeira, which would turn the wine into vinegar, I pulled it and bottled it into wine bottles, then replaced the spigot yet again. This new spigot I couldn't get to stop leaking. If the barrel is level, the spigot will leak a shot of liquor in about 10-15 minutes. If I tilt the barrel at about a 30 degree angle I can slow the rate of leakage, but not stop it completely. This is even after filling the barrel with boiling water to ensure that everything is expanded. I put some cheap Scotch into the barrel and, after a week, there's a little puddle on the floor of the sun room, with fruit flies all around. So, I think my little experiment may be over. I had hoped to use this barrel for making vinegar once I was done with spirits, but because of the leakage I don't even trust it to do that. Unless I can get the leak to stop, I'll pull the Scotch and use the barrel for firewood.

For the amount of money I sunk into the barrel, replacement spigots, shipping, and cheap liquor, I probably could have bought myself a bottle of Angel's Envy and a bottle of Lagavulin 16. Instead, I'm left with about a gallon of assorted spirits that are one or two levels up from rot-gut. Maybe good for mixed drinks or eggnog, but not really what I would choose to pour myself a dram of on a cold winter night. I won't call it a failure, since it was definitely a learning experience, but I don't think I'll do this again, unless maybe I can find myself a better cask, one without a spigot. I also now know, from the experience with the Madeira, that I won't be barrel aging any of my beers unless I can find a cask with solid heads.