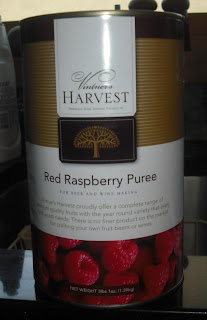 I transferred the sour base for my raspberry beer to secondary today, which is where I added the raspberry puree. It was advertised on Labelpeelers as Oregon fruit puree, but I got Vintner's Harvest instead. Maybe Oregon's was bought out? Who knows. The puree is already pasteurized, so there's no need to worry about sanitizing it. 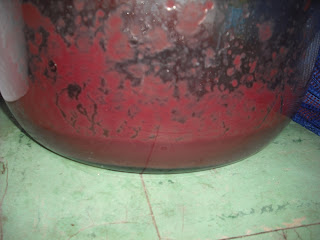 I soaked the can in sanitizing solution along with my funnel and can opener, then opened it up and dumped it right in. Three pounds of puree is surprisingly dense, it looks to take up only about as much space as a nice thick yeast cake. It's a little pulpy but not overly so. 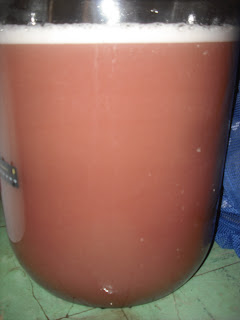 The color looks pretty nice right now, it's a darker red than I had expected, I'm assuming probably due to the pasteurization process. Advertised gravity of the puree is between 1.040 and 1.053. The pulp and color played havoc with my refractometer, but it looked to be about 13.4 Brix, which is a specific gravity of 1.054. The sour base started a little higher than expected, at 1.038, so I'm calculating a total starting gravity of 1.071. Assuming normal attenuation, then, I'm looking at about a 7% ABV beer. I'm not really sure what to expect with regard to fermentability of the puree. If it's 100% fermentable then I'll end up with something between 8% and 8.5%.
Posted by pomofo at 1:23 PM